What is GERD – Acid Reflux? 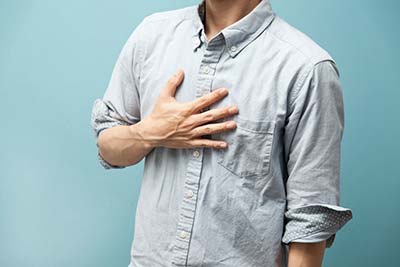 Gastroesophageal reflux disease is a very common problem in the United States. It is also known as indigestion or acidity. The classic presentation of the GERD is a burning pain felt behind the chest bone that radiates to the throat. It can also present in the form of a sour taste in the mouth, especially after the meal.  The patient can also have a nocturnal GERD whereby he experiences a burning pain while asleep and gets up all of sudden.  Thus the symptoms of GERD are annoying and can affect the quality of life of a patient.  The annoying symptoms are not the only problem with GERD; rather it is associated with serious complications such as esophageal strictures, Barrett’s Esophagus as well a very lethal esophageal cancer.

Thus it is of critical importance for us to treat GERD in order to get rid of the annoying symptoms as well as to prevent its complications. The treatment modalities for GERD vary from lifestyle modifications, medications as well as surgery.

What are the lifestyle modifications effective for the treatment of GERD (Acid Reflux)?

Lifestyle modifications are usually the first line option recommended for acid reflux treatment. They include measures such as weight reduction, elevation of the head end of the bed, cessation of smoking and avoiding excessive alcohol.

Obesity is found to increase the frequency as well as the severity of symptoms of GERD. There is enough scientific evidence available to support the fact that weight loss can effectively reduce the symptoms of obesity.

Elevation of the Head End of the Bed

There is a hypothesis which supports that lying flat on the bed increases the reflux of acidic stomach content into the esophagus. It is thought to contribute particularly toward the nighttime symptoms of GERD. This is why patients with GERD are always advised to raise the head end of the bed to approximately 30 cm.

To conclude, the main lifestyle modifications that are scientifically proven relive the symptoms of GERD are weight loss and elevation of the head end of the bed. However, you should try to adhere to all above-mentioned measures as none of them are actually going to harm you in any way. The issue about dietary measures, such as consumption of chocolate, citrus fruits, caffeine and spicy fruits can be addressed by a simple rule. Consume the above mentioned dietary stuff if you are not having symptoms of GERD with them, and stop using any one of them associated that is associated with the increase in severity as well as the frequency of the symptoms.