Causes of Asthma and Common Symptoms

Asthma is a long-standing respiratory disease. It can occur at any age and is estimated to affect about 24 million people in the United States. The epidemiologic studies by asthma doctors have indicated a recent increase in the prevalence of asthma, particularly in the western world.

What happens during an asthmatic attack? 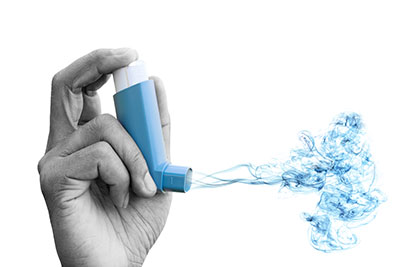 Normally during inhalation air moves through windpipe called trachea, the tubes called bronchi, smaller tubes called bronchioles and finally through the tiny sacs called alveoli. The oxygen from the inspired air is taken by the small blood vessels surrounding the alveoli while carbon dioxide passes out of these vessels into the alveoli so that it can be taken out during exhalation.

What are the symptoms of Asthma?

The most commonly noticed symptoms of asthma are listed below.

What are the causes of asthma?

Asthma is characterized by the inflammation and swelling of airways. There are certain triggers that can cause the inflamed airways to overreact even more resulting in an asthmatic attack. These triggers vary from person to person. The most commonly noticed triggers responsible for an asthmatic attack are listed below.

The allergens that are noticed to contribute to the development of asthma include pollens, grass, mold, animal dandruff, dust mites, and cockroach droppings. The common food allergens attributed to provoke an asthmatic reaction are eggs, peanuts, wheat, shellfish, and soy. Together allergens account for about 20% of the cases of asthma.

The most common inciting stimuli for an asthmatic attack are viral respiratory tract infections with Rhinovirus and respiratory syncytial virus. The risk of asthma is also increased in the case of bacterial infections.

Exercise can also trigger an asthmatic attack in some people that manifests as symptoms of asthma within 5 to 10 minutes of the workout.

Gastroesophageal reflux disease can cause reflux of acidic stomach content into the esophagus. This acid can reach the throat if GERD is severe, leading to the development of an asthmatic attack.

The risk of asthma is significantly increased in people who smoke.  This stands equally true not only for the cigarette smoke but also for the household smoke such as smoke from the barbeque and other activities involving cooking.

The medications that are found to trigger an asthmatic response include aspirin, ibuprofen, naproxen, beta blockers, and tartrazine.

Cold air and excessive humidity are the two factors related to weather that can contribute to the development of asthma.

Emotions such as stress, fear, anger, and anxiety can also trigger an asthmatic attack.

The polluted air contains numerous substances that can irritate the airways and cause asthma exacerbations.