Gerd Risk Factors, Complications, and Its Association with Obesity

Gastroesophageal reflux disease is caused by the flow of the acidic content from the stomach up into the esophagus.  This acidic content of the stomach damages the mucosa of the esophagus and produces the symptoms of GERD. The most common presentation of GERD is a deep burning pain felt behind the chest bone that radiates to the throat. GERD can also present in the form of a sour taste in the mouth.

It is also called heartburn or indigestion and is a very commonly encountered problem especially in western society. The problem with the GERD is that these troublesome symptoms not only affect the quality of life of a person but also increases the risk of progression to a number of deadly conditions such as Esophagitis, Barrett’s esophagus, esophageal strictures as well as malignant cancer of the esophagus. 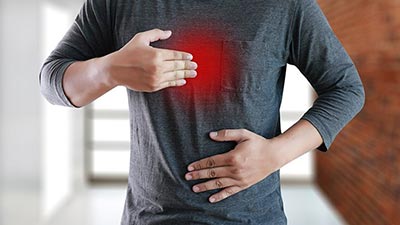 There are certain GERD risk factors which are strongly associated with the causation of the gastroesophageal reflux disease. They include

The Association of Obesity and GERD

The exact mechanism of how obesity contributes to the development of reflux has not been established yet. Currently, the most commonly accepted theory suggests that extra fats deposited in the abdomen exert a pressure on the stomach leading to a flow of gastric content up into the esophagus, thereby producing symptoms of heartburn. This association between obesity and the gastroesophageal reflux disease has been well documented in numerous scientific studies.

A study was conducted in Japan in 2008 that involved about 1800 subjects. The subjects were divided into three groups on the basis of weight namely thin, normal and obese groups. They were observed for the development of symptoms of GERD. The result showed that the prevalence of gastroesophageal reflux disease was about 21% in the thin group, 25% in the normal weight group, and 32% in the obese group.

A similar study published in The American Journal of Gastroenterology in 2005 reported that obesity can contribute as an independent risk factor toward the development of gastroesophageal reflux disease.  Furthermore, recent scientific research indicates that there is about three to six-fold increase in the symptoms of GERD in individuals with a body mass index above 35.

The ulcers can convert into strictures at the lower end of the esophagus that can interfere with the passage of food through the esophagus.

The long-standing exposure to the gastric acidic content causes a compensatory change in the innermost lining of the esophagus, making it more like the intestinal type. This is known as Barrett’s esophagus and it is associated with the increased risk of esophageal cancer.

It is deadly cancer that can occur as a complication of long-standing GERD. The mortality rate of esophageal cancer is very high.

Do you suffer from GERD? Come to Century Medical and Dental Center (Downtown Brooklyn, Gravesend, Flatbush, Fort Greene and Midtown Manhattan) and have your symptoms taken care of.