Gout is a disease involving joints that are characterized by the sudden onset of intense pain, swelling, and redness of the affected joint. The most typical finding of the gout is that it involves only one joint most of the time. The joint that is involved in more than 60% of cases of gout is the one at the base of the big toe. It is found to affect man more as compared to be in men as compared to the females.

How is Gout caused? 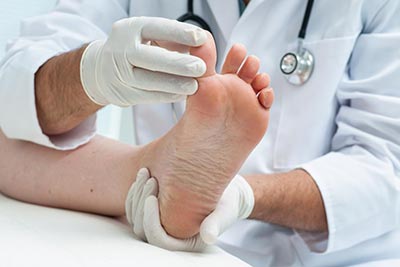 Purines are chemical substances obtained in foods such as meats and legumes. They form an integral part of the DNA and RNA and also help in providing energy for the different cellular reaction. The breakdown of these purine nucleotides produces a chemical substance called uric acid. Uric acid is normally excreted by passing it out mainly in urine as well as in stools.

The patients suffering from gout are however unable to get rid of uric acid like normal people, leading to an elevation in the blood uric acid level. Once the blood levels of uric acid are too high, it starts depositing in joints in the form of crystals. The deposition of urate crystals in joints provokes an inflammatory reaction, thus producing symptoms of Gout.

What are the risk factors for developing Gout?

The risk factors that can contribute to the development of gout are listed below.

What are the Options available for the treatment of Gout?

The treatment of Gout requires a combination of lifestyle measures and medications.

Non-steroidal Anti-inflammatory drugs work by reducing the pain and inflammation associated with gout.  Amongst them the drugs used most widely for the treatment of gout are stronger NSAIDS such as diclofenac sodium, Naproxen, and Indomethacin. They usually provide a complete relieve in about a week.

Colchicine is usually prescribed in patients with gout who cannot use the above mentioned Non-steroidal anti-inflammatory drugs. It can cause side effects related to the gastrointestinal tract such as nausea, vomiting, and diarrhea.

They are one of the potent drugs that can successfully relive the inflammation and pain associated with gout. They are however usually reserved only for the patients in whom NSAIDs and Colchicine cannot be used as they are associated with a number of serious side effects such as diabetes mellitus, cataract, osteoporosis when used long-term.

Allopurinol works by decreasing the production of uric acid in the body. This is however not used in the acute attack of gout as it can actually exacerbate the symptoms rather than relieving them. The therapy with Allopurinol is usually stared about 2-3 weeks after the onset of an acute attack of gout and it is very effective in preventing the future attacks of gout.

Probenecid is a drug that works by increasing the excretion of uric acid by kidneys, thus helping in the management of gout.

To conclude, gout can be successfully treated by the combination of above-mentioned lifestyle measures and medications.

You can talk to our Brooklyn podiatrists at Century Medical and Dental Center located in Downtown Brooklyn, Flatbush, Gravesend Fort Greene and Midtown Manhattan locations to discuss treatment options.