Graves disease is an auto-immune disease characterized by the overproduction of thyroid hormones. There are many other diseases involving thyroid gland as well as some rare conditions that don’t actually involve thyroid gland itself but still can cause excessive production of thyroid hormones however Graves disease is by far regarded as the most common cause of hyperthyroidism.

The symptoms associated with Graves disease are multiple involving almost all the systems in the body and could be troublesome however good news is that with proper treatment a patient can live a normal and healthy life without any serious long term complications.

How Is Graves Disease Caused? 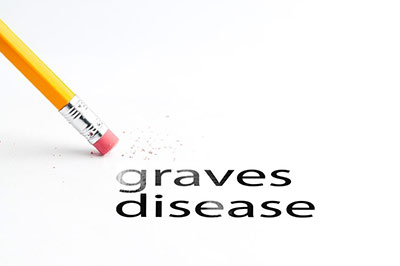 The thyroid gland produces hormones that are mainly involved in energy production, maintenance of temperature as well as growth and development in kids. Normally the production of thyroid hormones is maintained at an optimum level, thus avoiding the excessive production via another hormone called thyroid stimulating hormone secreted from the pituitary gland. This hormone kind of keeps a check on the blood thyroid hormone level.

In the case of Graves disease, this control is lost. Our own immune system starts producing antibodies that mimic the action of TSH. Thus thyroid gland keeps producing thyroid hormones around the clock resulting in excess serum levels, thereby producing all the manifestations we see with Graves disease.’

The symptoms commonly attribute to grave disease are as under.

The risk factors attributed in the causation of Graves disease are as under.

History of Graves disease in the family

The risk of developing GD is significantly increased if someone in your family is already having this disease. Recent scientific research also supports the role of inheritance in the causation of GD as GD is found to be clustered in certain families. The actual culprit genes, however, have not been identified yet.

For reasons not properly understood at the moment, autoimmune diseases, in general, occur more frequently in females as compared to the male and this holds equally true for the Graves disease.

The risk of developing Graves disease is increased in patients who are already suffering from an autoimmune disease.

Other risk factors that could possibly increase your risk of developing GD are cigarette smoking, Pregnancy and an age above 40.

Do you suffer from Graves disease? Come to Century Medical and Dental Center (Downtown Brooklyn, Gravesend, Flatbush, Fort Greene and Midtown Manhattan) to find out your treatment options.