How Dangerous Is Cirrhosis of the Liver?

Liver performs many actions vital for life. It process nutrients, produces proteins, stores sugar, control levels of different hormones in the body, blood cholesterol level, and filters the unwanted substances. Cirrhosis is the endpoint of a number of liver diseases that is characterized by the replacement of normal liver tissue by the scar tissue. This interferes with the blood flowing through the liver and preventing it from performing its above-mentioned functions.

Cirrhosis is estimated to cause about thirty five thousand deaths annually making it the ninth leading cause of death in the United States.

The common causes of cirrhosis such as long term substance abuse of alcohol and hepatitis B and C infections are summarized below. 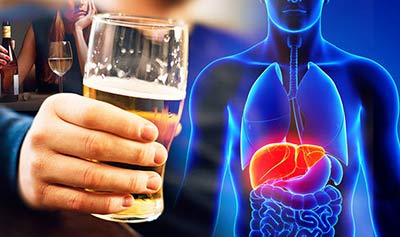 Alcohol is metabolized by the body mainly in the liver.  The metabolism of alcohol produces a chemical substance called acetaldehyde that exerts a hazardous effect on the liver. The liver has some ability to detoxify this substance to some extent however indulgence in heavy drinking for a prolonged period of time, will result in its  accumulation in the liver leading to the development of cirrhosis.

The risk of long-term alcohol abuse to cause cirrhosis has been documented in numerous studies.. In  one such study chronic alcoholism was found to be the most common cause of cirrhosis responsible for the cirrhosis in about 40% of the subjects included in the study. Research indicates that with long-term abuse of alcohol the risk of developing cirrhosis is increased about 5 times in females as compared to the males.

Chronic Hepatitis B and C

Primary biliary cirrhosis is characterized by the damage to the bile canaliculi, smaller ducts carrying bile. Thus there is a builds up of bile overtime, damaging the liver and causing cirrhosis.  It is found to be affect women more commonly as compared to the males.

It is a liver disease that is characterized by the narrowing, hardening and ultimately the blockage of bile ducts, tubes carrying bile from the liver to the intestines. The excessive accumulation of bile over a long period of time can cause damage to the liver again resulting in cirrhosis.

It is a genetic disease that is transmitted from the parents to offsprings. The main problem here is that the body cannot get rid of the extra copper leading to its accumulation in different parts of the body. Too much accumulation of copper can cause damage to the liver ultimately resulting in cirrhosis. The good news is unlike most of the other inherited disorders there are treatment options available for Wilson disease and with the proper treatment, patients can almost live a normal life.

The other diseases that can cause cirrhosis includes autoimmune hepatitis, cystic fibrosis, alpha-1-antitrypsin deficiency, heart failure and even some drugs exerting a toxic effect on the liver.

If you have problems with your liver, come to Century Medical and Dental Center (Downtown Brooklyn, Gravesend, Flatbush, Fort Greene and Midtown Manhattan) to speak with one of our specialists.