Introduction to Thalassemia and Its Types

Thalassemia is a genetically inherited blood disorder. It is characterized by the presence of an aberrant form of hemoglobin, a protein responsible for the carrying oxygen in the blood. In addition to a low oxygen carrying capacity, this abnormal form of hemoglobin also makes red blood cells more vulnerable to destruction, thereby decreasing the quantity of healthy red blood cells and causing anemia. 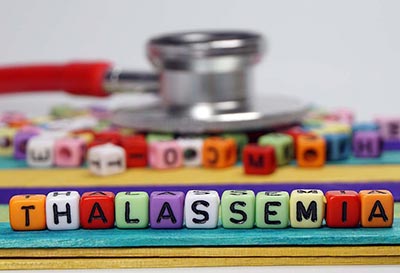 The hemoglobin molecule is normally made up of two alpha and two beta protein chains. In Thalassemia one of these chains is defective and depending upon the type of the protein chain involved it can be divided into two major types, Alpha and Beta Thalassemia.

Normally, the synthesis of Beta globulin protein chain is regulated by two genes, with one inherited from each parent. Beta Thalassemia occurs when there is a defective synthesis of the Beta Protein chain secondary to an inherited mutation of either one or both of these genes.  It is further divided into two types.

It occurs when a gene inherited from only one of the parent is mutated while the other counterpart inherited from the other parent is normal. Anemia although present, in this case, is usually not that severe and the patient can live a healthy life without transfusions.

Both of these conditions occur when the gene inherited from mom as well as dad is mutated. In the case of Beta-Thalassemia intermedia, the anemia is mild, due to which you may require blood transfusions but it is just that you don’t need it that frequently. On the other hand, the anemia in case of Beta-Thalassemia Major is more severe. Hemoglobin levels usually drop to 4 or even low as compared to a normal value of 12-14. This is why these patients are depended on frequent transfusions, usually at least once a month

Normally, synthesis of Alpha globulin chain is governed by four genes, with two inherited from each of the parents.  Alpha Thalassemia occurs when there is a defective synthesis of the alpha-globulin protein chains secondary to mutations involving either one, two, three or even all the four of these genes.  It is further divided into four types.

It occurs when only one of the four genes is mutated.  The patient, despite carrying an abnormal gene can live a healthy life without any blood transfusions. There is however a risk that he/she may pass it to the kids.

The mutation of two out of the four genes results in a condition called Alpha-Thalassemia. The patient may develop some anemia but is not dependent on transfusions. These people can otherwise live a healthy life, except for the fact that they can pass the disease to kids.

It occurs when three out of the four genes required for the synthesis of alpha globulin protein chain are mutated. The anemia associated with this condition varies from mild, moderate to severe, and the patient may require blood transfusions.

It occurs when all the four genes required for alpha globulin synthesis are mutated. This is the worst form that can either cause the death of the fetus inside the uterus before even it is born. In some other situations, the child may be born alive but will die very soon after birth secondary to severe anemia.

To find out more about thalassemia, come to Century Medical and Dental Center (Downtown Brooklyn, Gravesend, Flatbush, Fort Greene and Midtown Manhattan) and talk with one of our best internist Dr. Dvorkina or other specialists.