Most of the people who smoke try to quit at some point and change their lifestyle. However, in reality, no more than 5% of these people actually succeed unless they seek medical attention. This addiction occurs secondary to a chemical ingredient of smoke called, Nicotine.

Nicotine contained in the cigarette smoke actually causes the release of chemicals such as dopamine and adrenaline in the brain and it is the elevated level of these chemicals that exerts all the pleasant effects on the mood of a smoker. Upon cessation of smoking, the level of these chemicals fall causing withdrawal symptoms such as anxiety, restlessness, irritability, undue anger, and hunger.  To avoid these really annoying withdrawal symptoms one resumes smoking once again.

Nicotine Replacement Therapy actually provides us with the nicotine just like a cigarette but unlike that, we are not inhaling any of those cancer-causing chemicals anymore. The amount of nicotine provided during NRT is, however, less than half of its amount present in a regular cigarette and this amount is gradually reduced until you don’t need it anymore. 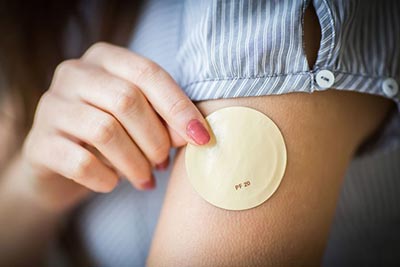 The nicotine patch is applied on a dry hairless area of the skin such as upper part of the chest, arm or buttocks. It comes in different strengths and is applied once a day usually at the same time every day.

Nicotine is also provided in the form of chewing gums; however, you should not swallow it. The nicotine contained in the gum enters the body through the blood vessels in the mucosal lining of the mouth.

Lozenges are the tablets containing nicotine. You have to place them in your mouth but instead of swallowing you have to keep sucking them until they slowly dissolve and enter the bloodstream again via blood vessels in the mucosal lining of the mouth.

In addition, Nicotine Replacement Therapy is also available in other forms such as nicotine inhalers as well as Nicotine nasal sprays.

Nicotine Replacement Therapy is safe in general, but the use of NRT in certain conditions requires extra precautions.

Nicotine Replacement Therapy has been found to cause low birth weight in babies. Thus, to ensure your own safety as well as the safety of the fetus during pregnancy, you are advised not to use any over the counter nicotine-containing products without consulting a health-care professional.

If you would like to find out more about Nicotine Replacement Therapy, please come to Century Medical and Dental Center (Downtown Brooklyn, Gravesend, Flatbush, Fort Greene and Midtown Manhattan) to speak with one of our respiratory specialists.