Our stomach contains Hydrochloric acid that is a strong acid.  In order to protect this acid from damaging the stomach itself or the adjacent parts such as food pipe and the intestines, our body is naturally provided with different defense mechanisms. One of these mechanisms that make sure to prevent the damage mediated by the stomach acid is mucosa, a tissue lining the inner walls of the stomach and intestines.  Any break or tear in this tissue lining of either stomach or the intestine is what is referred to as peptic ulcers.

The word peptic ulcer is actually a misnomer. Initially pepsin, a protein-digesting stomach enzyme was held responsible for the causation of these ulcers, however, the truth is, it is the stomach acid and not the pepsin enzyme that causes peptic ulcers.

Peptic Ulcers Secondary to Prolonged Use of NSAIDs 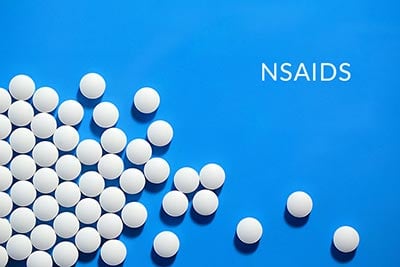 NSAIDs represent a group of medications aimed to relieve pain. They include drugs such as aspirin, mefenamic acid, naproxen, and diclofenac etc. They work mainly by inhibiting the synthesis of one of the chemical mediators of pain, called prostaglandins. In addition to pain medication, PGs are also involved in the protection of stomach mucosa against the strong hydrochloric acid produced by the stomach. Thus, it is clear now that when you inhibit the PGs synthesis via NSAIDs, you will relieve the pain but as a side effect, you will also be deprived of the gastroprotective effect of the PGs. Thus, prolonged use of NSAIDs may lead to the development of peptic ulcers.

Now an important point to keep here in mind is that NSAIDs are one of the most widely used pain medications. They are used in every age group of life, and for conditions ranging from a simple toothache to the chronic pain conditions such as ankylosing spondylitis, osteoarthritis, and rheumatoid arthritis. The condition requiring prolonged use of NSAIDs makes you more prone to develop peptic ulcers. This is why if you are using NSAIDs on regular basis your doctor will always provide you with medications to inhibit secretion of stomach acid, thus preventing you from developing gastric ulcers.