Reasons to Get a Glutathione Injection

If you are tired of taking the same old supplements and medications to manage your diabetes, arthritis, respiratory problems, blood circulation issues, and other skin and cell diseases, try glutathione, as it might be the solution to all your woes. Known as the master antioxidant for its exceptional damage control protection, and immune system support, glutathione can help you detox and feel better in today’s ever-present environmental toxins. Schedule an appointment with the internal medicine doctor at the Century Medical and Dental Center to learn how a glutathione injection can benefit you. The experienced and board-certified physicians will explain in detail how this useful compound can bring a positive change in your life.

Glutathione is a peptide. It is produced and present in every cell of the human body, including the immune cells. It is made up of three essential amino acids that include cysteine, glutamate, and glycine. It is often referred to as the master detoxifier for its incredible ability to promote skin health, body function, overall mood, and well-being.

Although it occurs naturally within the body, glutathione levels can decline by several factors that include poor nutrition, environmental toxins, stress, and even age. Glutathione injection therapy is given to people to increase their glutathione levels and promote overall health. 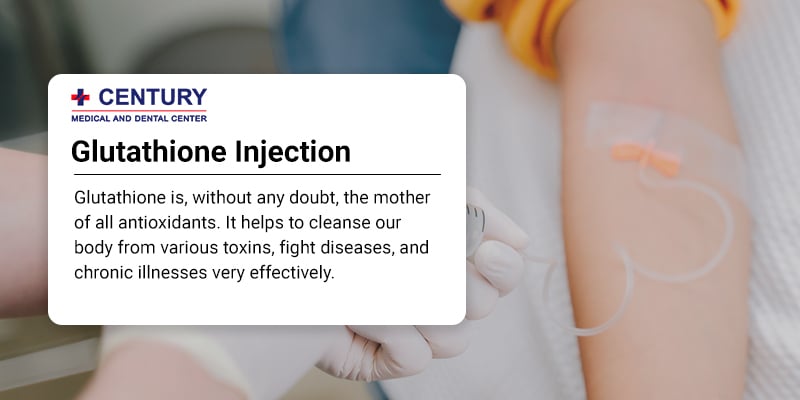 Top Reasons to Get a Glutathione Injection

Glutathione is, without any doubt, the mother of all antioxidants. It helps to cleanse our body from various toxins, fight diseases, and chronic illnesses very effectively. Not only this, but it can also make your skin tone brighter, enhancing your overall looks.

Glutathione is a powerful antioxidant that is crucial to almost all body functions. Low levels of glutathione can result in various deficiencies and problems in the body.

Many chronic health conditions are associated with low glutathione levels, including autoimmune diseases, heart disease, and skin disorders, to name a few. In several cases, prescription medications to treat these conditions further depleted these levels and resulted in complications.

Glutathione Injection – Before and After

A glutathione injection has worked magic for many people. The before and after photos of the subjects who took glutathione shots showed it to work as a healing agent, and there were noticeable improvements.

Studies conducted in regard also proved that administration of glutathione resulted in moderate skin lighting. Further studies and research is underway to reveal how this organic compound works and what more benefits it can offer.

Glutathione injection is used by doctors to detox the body of the poisonous side effects of medical treatments such as chemotherapy. It is very beneficial due to its radial free defense mechanism for the cells, which helps them rejuvenate and remain healthy. It is injected into the muscle for its numerous health benefits, which range from disease-fighting to fat burning and infertility to strong swimming powers.

Here are some benefits of a glutathione injection:

Oxidative stress occurs due to an imbalance between the production of free radicals and the body’s inability to fight them off. A lack of glutathione in the body can lead to oxidative stress that can cause various health problems like diabetes, arthritis, and cancer. Glutathione injection counteracts the stress we accumulate during the day.

Diseases can occur when too many free radicals or enemies enter the body, and there is a lack of antioxidants or glutathione to fight them. According to experts, glutathione injections fight against the impact of oxidative stress and reduce diseases, especially cancer, the most feared disease.

Glutathione injection fights those unpleasant lumps on the skin that can become very annoying. It contains whey protein, which makes the scaly bumps disappear effectively without requiring painful treatment.

It Aids in Burning Fats

Glutathione injection has proved to be effective for burning fats instead of storing them in the body. It is particularly beneficial for older adults whose glutathione productive capability has declined and helps to rev up mitochondrial action, increasing their metabolism as a result. Research shows that it also plays a key role in improving insulin resistance in the body.

A glutathione shot can increase blood circulation in the arteries, sweeping away plaque buildup that can result in heart diseases. It enhances the mobility of people suffering from peripheral artery disease that causes pain in the legs when they walk due to circulatory problems. With a glutathione injection, it becomes easy to walk without suffering from pain or cramps even for long distances, as it eases the flow of blood in the arteries.

Parkinson’s disease affects the central nervous system and is defined by symptoms such as tremors. There is no known cure for this disease, but it has been found that glutathione injection can reduce the tremors of this debilitating disease. Glutathione can lessen the symptoms, thus improving the quality of life of people suffering from symptoms of Parkinson’s.

Helps to Fight Against Autoimmune Diseases

Glutathione injection can protect from autoimmune disease in which the victim’s cells from their self-induced free radicals attack their own mitochondria. Glutathione works hard to protect mitochondria by eliminating these free radicals and keeps the oxidative stress in check, preventing chronic inflammation that can lead to various diseases, including rheumatoid arthritis, celiac disease, and lupus.

It Controls the Impact of Diabetes

Glutathione injection has proved to be beneficial for reducing symptoms of asthma. It is a byproduct of what is used in the medications recommended for thinning asthmatic mucus.

There are minimal side effects of glutathione. They can range from mild to moderate and may include cramping, bloating, or a rash, in case of overdose. Side effects of glutathione are not known as it does not lead to any lasting symptoms or cause medical concern due to its naturally occurring properties. It is essential to get it administered by a trained and experienced medical professional to avoid or minimize its side effects.

There have been no critical complaints to warrant a study into its side effects.

Consult your doctor if you have read or heard about the remarkable benefits of this compound and how this injection can help achieve your health goals. With stupendous strengths, glutathione injection has been named the wonder drug and master antioxidant as it provides exceptional damage control protection for the body cells from dangerous invaders. Visit an internal medicine doctor at the Century Medical and Dental Center to know how to get glutathione injections, and how many jobs you require to get desired results and maintain them. The top NY doctors strive to enhance your mind and body and offer the best solutions that ensure your wellbeing.