Syphilis: What Do You Know about Sexually Transmitted Diseases?

Syphilis is a sexually transmitted disease caused by bacteria Treponema pallidum. The disease progresses in stages, once infected. It is easily curable when diagnosed and treated in its early stages. However, in advanced stages the disease spreads all over the human’s body, affecting all the organs, leading to severe illness and even death.

Syphilis is also transmitted from mother to child during pregnancy and childbirth.

Signs and Symptoms of Syphilis

Syphilis is a disease that progresses in stages. Each stage of the disease has different signs and symptoms. Infection can be transmitted to others during the first two stages of the disease.

Primary stage – is characterized by the presence of a single sore called chancre. In some cases more than one chancre are present. The incubation period between the infection with syphilis and the appearance of the chancre varies from 10-90 days, but usually in average it will take 21 days. The chancre is usually firm, round, small, and painless, located in the vulva, small or large vaginal lips, vagina, cervix, tongue, etc. In this stage, syphilis can be passed to others through contact with the chancre during vaginal, anal, or oral sex. It will take 3-6 weeks for the chancre to heal, with or without treatment. If the infection is not treated, it advances to the secondary stage.

Sexually transmitted diseases of the rectum such as HPV, syphilis, gonorrhea, or herpes may cause anus bleeding.

Secondary stage – usually starts a few weeks after the chancre has healed. It is characterized by a rash that starts in one or more areas of the human body. Other possible signs and symptoms of the secondary stage include: 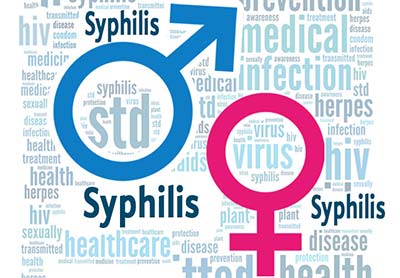 The infection can be transmitted to other people through contact with the open sores. The rash and other possible signs and symptoms will go away even without treatment. However, the infection will become latent and it will lead to late stages of the disease.

Late stage – occurs in only 15% of the cases. The period from the first infection until the late stage of the disease is more than 15-20 years. During this late stage the infection is spread throughout the human body and affects organs like the heart, brain, nerves, blood vessels, liver, bones, joints, etc. Depending from the affected organs the signs and symptoms of the late stage may include blindness, dementia, paralysis, heart failure, etc. Death is also possible. Proper treatment in the early stages of the disease stops its progression to a late stage and widespread of the infection throughout other organs of the body.

How Is Syphilis Diagnosed?

Our gynecologists or internal medicine doctors diagnose Syphilis with samples of blood that are taken for lab STI testing. The fluid taken from the syphilis sores is tested under special microscope.

How Is Syphilis Treated?

It is very important to diagnose and treat the syphilis on its early stages. When left untreated the disease will advance to its late stages, causing different organ failures and even death. Antibiotics are the recommended drugs for all stages. Penicillin is usually used. The dosage and length of the treatment will depend from the severity of the infection and its stage. Once the damage to the organs occurs, it cannot be reversed. Treatment of other signs and symptoms due to organ damages are necessary.

Syphilis is an infection that can reoccur. Once treated from the disease, you can get re-infected if exposed to it.

Having safe sexual intercourse is the best prevention against syphilis and other sexually transmitted diseases. Avoid any sexual contact while you are being treated for syphilis. Tell your partner as he should get tested for syphilis and treated if infected.

6-12 months after a complete treatment for syphilis retests are needed.

Do you have questions about syphilis or STI testing? Come to Century Medical and Dental Center (Downtown Brooklyn, Gravesend, Flatbush, Fort Greene and Midtown Manhattan) for a consultation today.