What Are Nabothian Cysts and How Are They Treated?

Nabothian cysts are raised bumps on the cervix. These cysts are mucus-filled lumps that appear on the outer surface of the uterine opening or the cervix. Nabothian cysts are also referred to as nabothian follicles or mucinous retention cysts. These cysts generally tend to form when the normal outer most tissue layer of the cervix abnormally grows over its mucus producing glandular tissue. As a result, the mucus secreted by the glandular tissues is trapped between the two layers, resulting in a nabothian or cervical cyst.

The asymptomatic nature of the nabothian cysts results in most of them going undetected until a woman undergoes a routine gynecological scan. Incidentally, some women also come across these cysts for the first time during cervical cap or diaphragm insertion. These cysts are noncancerous and harmless, but long-standing in nature. 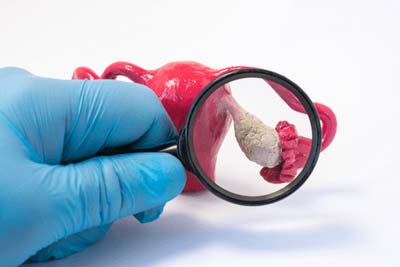 Nabothian cysts do not produce any symptoms. However, unusually large nabothian cysts may result in mild discomfort. These cysts normally grow between 2-10 millimeters in diameter and contain mucus that differs in color from light yellow to amber.

The primary cause of nabothian cysts is an overgrowth of the cervical lining on the outside resulting in the formation of pockets with trapped mucus. However, the reason for such an overgrowth is still unclear. These cysts are very common in women after childbirth. Additionally, they are also seen in menopausal women due to hormonal changes that cause a thinning of the cervix.

The appearance of the nabothian cysts is usually enough to help your gynecologist confirm a diagnosis. Many doctors located near you or  “gynecologist near me” at Century Medical and Dental Center may also perform a colposcopy to get a magnified view of the cervix and ascertain if the cyst is truly a noncancerous nabothian or something else. However, any abnormalities visualized in the cysts during this procedure are confirmed with a biopsy to study the pattern of the cells and mucus and rule out rare forms of cervical cancer. Nonetheless, most nabothian cysts are diagnosed through a routine pelvic exam alone and may not require any further diagnostic measures.

Nabothian cysts are long-term in nature and can be left alone without any corrective measures, mainly because they are asymptomatic and harmless. However, your gynecologist may advise surgical procedure, the resection of a nabothian cyst if it’s too large in size. Nabothian cysts are removed surgically by performing an electrocautery or a cryotherapy procedure. Electrocautery is performed by using a hot probe to burn and destroy the overgrowing tissue around the cyst and cryotherapy is performed by freezing the cystic tissue by exposing it to liquid nitrogen.

Do you suffer from nabothian cysts? Come to Century Medical and Dental Center (Downtown Brooklyn, Gravesend, Flatbush, Fort Greene and Midtown Manhattan) and get treatment advice from our gynecologists.