What Are Signs of Gluten Intolerance?

Post in Gastroenterology in Brooklyn
by Century Medical & Dental Clinic
Comments Off on What Are Signs of Gluten Intolerance?

Getting sick after eating and suffering from symptoms like constipation, diarrhea, nausea, abdominal pain, and other such problems may indicate gluten intolerance. Gluten intolerance has many signs, and it may depend on the foods you eat and how it affects your body. Sometimes it is confused with celiac disease, but it is not the same condition and can be managed by cutting down gluten. Consult an expert gastroenterologist at the Century Medical and Dental Center to have your condition accurately diagnosed and learn about options for treating and managing it. The top specialist NY analyzes your discomfort, determines your symptoms, and comes up with effective solutions depending on your needs to avoid further discomfort.

What Is Gluten Intolerance?

Gluten intolerance occurs when you get sick after eating gluten. It is a condition that stops the body from processing or absorbing gluten. You may feel bloated, gassy, or tired. People with celiac disease have an autoimmune response to gluten. It means their bodies try to fight against gluten as if it were a virus. This reaction causes inflammation and damage to their digestive tracts.

Gluten is a protein found in many foods, particularly wheat, barley, rye, and other grains. Common foods and drinks including pasta, cereal, and beer contain gluten. At times, vitamin supplements and medications can also contain gluten. 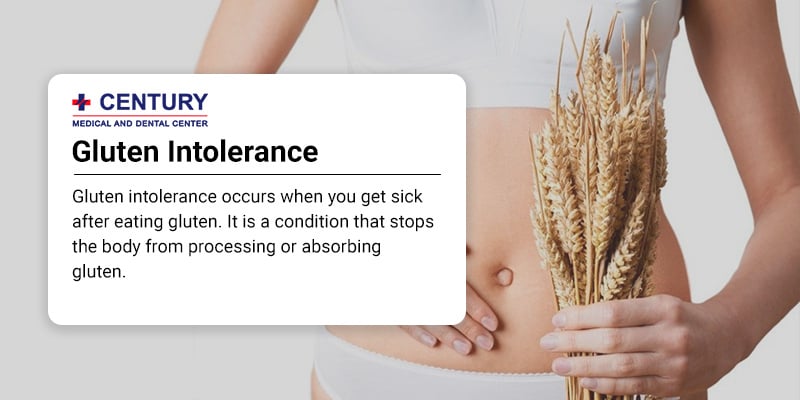 Is Gluten Intolerance a Gluten Allergy?

Who Gets Gluten Intolerance?

Research suggests that about 6% of the US population is gluten intolerant. It is more common than celiac disease, which affects about 1% of the population.

The exact causes of gluten intolerance are not clear. Research shows that many people may not be sensitive to gluten but a specific carbohydrate found in many foods. Their bodies do not absorb the carbohydrates as they should. They stay in their guts and ferments, leading to sickness.

Other research suggests that wheat affects the lining of some people’s digestive tracts. This lining usually keeps the bacteria from leaking out of the intestines. In people with gluten intolerance, this lining may not work as it should, allowing bacteria into their blood or liver, causing inflammation.

People suffering from gluten intolerance report regular instances of diarrhea and constipation. Having digestive issues occasionally is normal as they can result from several factors, but experiencing them on most days can indicate an underlying condition.

People with celiac disease may also experience diarrhea and constipation. They may also have poop that smells particularly unpleasant, as the condition causes poor nutrient absorption.

It is another common symptom that people report suffering from a case of gluten intolerance. This refers to the feeling of a full stomach that is uncomfortable and lasting. It is also usual to feel a buildup of gas.

Overeating is the main reason for bloating, but it can occur for many other reasons too. People with gluten intolerance may feel bloated, and it is not necessarily related to the amount of food they eat.

Fatigue is another symptom that many people find hard to identify. It may have a lot of different causes, many of which are not related to any medical condition.

People with gluten intolerance may have persistent feelings of tiredness that impair their daily functions.

Nausea is also a known sign of gluten intolerance. It occurs particularly after consuming a large meal that contains gluten. Nausea can have many causes, but if it often occurs after eating gluten, it may be a sign that your body is intolerant to it.

Other Signs of Gluten Intolerance

People with gluten intolerance may experience several of these symptoms though they are less common. They include:

How Is Gluten Intolerance Diagnosed?

To diagnose gluten intolerance, it is essential to ensure that no other severe condition such as celiac disease or a wheat allergy is present. The doctors take a blood sample that is analyzed to detect the presence of antibodies that could indicate celiac disease or wheat allergy. In some cases, other tests may be needed to check for the problem.

Even if the doctor has ruled out a more severe condition behind your symptoms, it can still be tough for them to confirm if it is gluten intolerance as there are no tests for it. The most common method people use to determine if gluten intolerance is present is to reduce or remove gluten from a diet and look for any changes in the symptoms.

Keeping a food diary can help in this regard. You can keep a track of what you are consuming and the symptoms you are having, and it will allow the doctor to make an accurate diagnosis.

How Gluten Intolerance Is Treated?

There is no way to cure or treat gluten intolerance. Most people find relief from the symptoms of gluten intolerance by switching to a gluten-free diet. You will have to work with your primary care doctor to learn what foodstuffs contain gluten, how they can harm you, and how to eliminate them from your diet to feel better.

You can also ask your doctor about adding probiotics to your diet. Probiotics increase the content of good bacteria in your gut, and they can help reduce the symptoms of bloating, gas or constipation.

Gluten intolerance affects many people. You may experience pain, but it does not affect long-term health. If your symptoms are mild after eating gluten, you may not need to avoid some of your favorite gluten-containing foods entirely.

If you are experiencing symptoms that seem like gluten intolerance, it is essential to talk to your doctor to identify the root cause. Celiac disease presents very similar symptoms, and it is a serious condition that must be properly addressed. Schedule an appointment with the experienced and board-certified gastroenterologist at the Century Medical and Dental Center to learn how to switch to a gluten-free diet or what food items you need to remove from your diet to feel better. The digestive tract specialists NY help you eat right and stay healthy without suffering from nutritional deficiencies or long-term weakness.