Peptic Ulcer is a term used to define ulcers that is holes or breaks in different parts of the gastrointestinal tract such as the esophagus, stomach, and duodenum.

Mucosa is a protective layer that forms the innermost lining of the gut. One of the functions of the mucosa is to protect the gut from gastric acid-mediated damage to the stomach as well as parts of the gastrointestinal tract near stomach such as esophagus and duodenum. The barrier function of mucosa is lost in case of Peptic Ulcer Disease, leading to the exposure of the walls of the above-mentioned parts to the acid, causing damage to them and ultimately leading to the formation of ulcers. 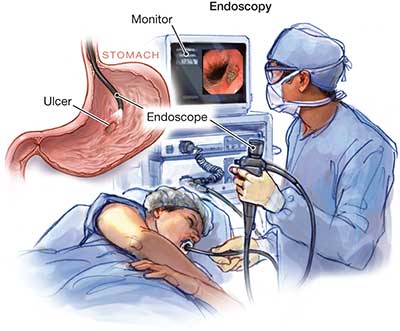 According to our Brooklyn gastroenterologist, the risk factors that are commonly attributed in the causation of Peptic Ulcer Disease are summarized below:

The two most serious complications implicated in the settings of a long-standing Peptic Ulcer Disease referred to by our Brooklyn gastroenterologist are given below.

The ulcer can bleed sometimes. Recent research attributes about 50% of the cases of sudden onset gastrointestinal bleeding either in the form of bloody vomiting or passage of black stools to the peptic ulcer disease. The outcome depends on the quantity of blood loss.

In the case of small ulcers, a small amount of blood loss could occur ultimately leading to the development of blood loss anemia over a period of time. The patient becomes lethargic, weak, inactive and develops other symptoms such as headache and inability to sleep.

In case of deeper ulcers, there could be involvement of a major blood vessel which could result in a massive bleed manifesting in the form of vomiting fresh blood or passage of black stools.  Regardless of the mode of presentation of bleeding, it requires quick emergency measures to save the life of a patient.

Perforation of the Ulcer

The successful treatment of Peptic Ulcer Disease can be achieved by an appropriate patient education as well as by using different medications depending upon whether the ulcer is due to Helicobacter pylori or not, which is decided by our leading Brooklyn gastroenterologist at Downtown Medical Center.

Medications to Treat Peptic Ulcer Disease Due to Helicobacter Pylori

The different medications used to treat Helicobacter Pylori mediated Peptic Ulcer Disease are given below, but before starting treatment you should consult with our Brooklyn gastroenterologist at Downtown Medical Center.

They are aimed to eradicate Helicobacter Pylori. They include drugs such as clarithromycin, amoxicillin, tetracycline, and metronidazole.

They include drugs such as omeprazole, esomeprazole. They are aimed to decrease the production of acid by the stomach and thus enhance the healing of the ulcer.

They include drugs such as ranitidine, famotidine, and nizatidine. They also decrease the gastric acid production and improve the healing process by a mechanism different from that of PPIs.

Most of the time different drugs are used in combination to eradicate Helicobacter Pylori successfully. The most widely recommended regime consists of a combination of amoxicillin, erythromycin and a PPI such as esomeprazole. The therapy with this regime is usually continued from a period of ten days up to 2 weeks.

Peptic Ulcer Disease that is not caused by Helicobacter Pylori can be managed with proton pump inhibitors only.

Additional Measures You Should Adapt to Prevent Peptic Ulcer Disease

The measures that you can adapt to prevent the risk of developing Peptic Ulcer Disease are summarized below and recommended by our Brooklyn gastroenterologist at Downtown Medical Center.