Hemoglobin is an iron-containing protein present inside the red blood cells that normally transports oxygen in the blood and delivers it to all the organs in the body. Thalassemia is a genetic defect involving this hemoglobin protein.

The inherited defect in the hemoglobin interferes with its oxygen-carrying capacity, thereby depriving all the organs including brain and heart from getting adequate oxygen, leading to brain disorders. In addition, this defect leaves the red blood cells more liable to destruction, thus decreasing the amount of healthy red blood cells and causing anemia, a type of blood disorder. 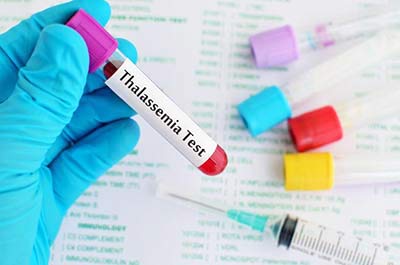 History of disease in a family, cousin marriage and origin from certain ethnic descent are some of the commonly attributed factors to increase the risk of developing Thalassemia.

Like I said the aim is to keep hemoglobin level above 10 that can be achieved only with repeated transfusions. The amount of blood required varies according to the weight of the patient however, usually, a patient suffering from Thalassemia major is transfused every 1 -2 month.

The main problem with the repeated blood transfusion is that it causes a buildup of iron in the body. Excessive iron gets deposited in the liver, brain, heart as well as endocrine glands such as the pancreas, thyroid and parathyroid gland resulting in their dysfunction over the period of time.

This is why iron chelating agents and other substances such as ascorbic acid are used with the aim to prevent this build up of excessive iron in the body.

In some cases, the spleen may also be removed with the aim to decrease the number of transfusions required as this is where red blood cells are broken down. Bone marrow transplantations and gene therapy are also being attempted and could come as ultimate treatment options for Thalassemia major in the future.

If you would like to speak to a Brooklyn primary care physician,  come to Century Medical and Dental Center (Downtown Brooklyn, Gravesend, and Flatbush) for a consultation today.