What you think may be a common cold can turn out to be acute bronchitis. But even that’s not dangerous, since the acute form of bronchitis lasts only a couple weeks. If it lasts longer, you’ve developed chronic bronchitis, which may never be cured. Your medical specialist at Century Medical and Dental Center helps you control your symptoms so you can live a normal life again. At this Brooklyn practice, you have access to specialists across the spectrum, so you get the best care available. 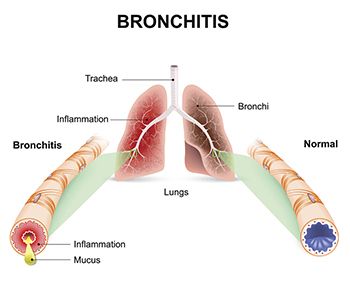 Air travels into and out of your lungs via specialized passages called bronchial tubes. Inflammation of these tubes inhibits breathing and causes bronchitis. Whether you have acute bronchitis or chronic, you often cough up thick, discolored mucus when you have this condition, making it both personally and socially unpleasant.

Common cold symptoms — such as a runny nose, sneezing or headache — may accompany an acute case. Your cold symptoms may resolve in a week or two, but bronchitis symptoms often linger for several weeks. In chronic cases, the cough remains for at least three months with a recurrence for at least two consecutive years.

Symptoms of Acute and Chronic Bronchitis

Acute bronchitis, the more common condition, develops from some kind of respiratory illness. It’s a short-term condition that may even disappear on its own, if you treat it with rest and lots of fluids. Chronic bronchitis results from the constant inflammation or irritation of the bronchial tubes. In its chronic form, just when you think you’ve recovered, you relapse again and again.

Both acute and chronic bronchitis exhibit similar symptoms, such as:

Speak with your doctor if your cough lasts longer than three weeks, produces blood, accompanies a high fever, prevents sleep or produces wheezing and shortness of breath. What you thought was just a bad cold may turn out to be chronic bronchitis.

Causes and Risk Factors for Bronchitis

Acute cases of bronchitis can happen to anyone who develops a cold, walking pneumonia, or the flu from a viral infection. Other lung conditions also precipitate chronic cases. Those at risk for developing bronchitis include:

Since antibiotics don’t work against viruses, your doctor doesn’t prescribe them for bronchitis unless you develop a secondary bacterial infection. The good news is that most cases of acute bronchitis, like colds, resolve on their own, usually within two weeks. Early intervention of an acute case of bronchitis also may save you from developing a chronic form of the disease. Century Medical and Dental Center internal medicine specialist offers the best treatment for bronchitis available, which involves medication to control your symptoms. Symptom control measures include:

Home therapies that your Brooklyn doctor may endorse include:

Like any good treatment protocol, preventing infection and bronchial symptoms helps you avoid nagging coughs and subsequent damage. To keep acute bronchitis symptoms from turning into chronic bronchitis, follow some simple self-care habits, such as:

Helping you relieve your symptoms and get back to your normal daily activities are your Brooklyn doctor’s top priorities. Don’t settle for feeling OK, when you can feel great with the right combination of treatments. Contact the Downtown Brooklyn clinicians to get the care you need today so you feel better tomorrow.