There are times when image tests, like x-rays or MRIs, aren’t sufficient. So if you receive an abnormal Pap smear result or a genital wart is discovered on your cervix, your Brooklyn gynecologist relies on a cervical cone biopsy. It’s a minimally invasive procedure to remove a cone-shaped piece of tissue from your cervix in a safe and quick manner. Visit Century Medical and Dental Center for a thorough exam and expert treatment, even when you need a biopsy done. 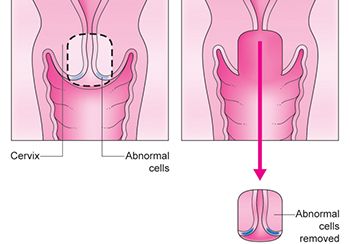 A cervical cone biopsy, also known as a conization, is a procedure to remove a cone-shaped sample of tissue from your cervix. The tissue is then sent to a lab for testing. Conization is usually done whenever abnormalities are detected to determine if abnormal cervical cells are cancerous.

To perform the biopsy, your top gynecologist at Century Medical and Dental Center, a multi-specialty medical practice in Brooklyn, follows a set number of steps to collect the tissue sample. Your doctor:

Why You Need A Cone Biopsy

Doctors rarely resort to surgery, even minimally invasive surgery, without cause. In this case, the risks of not treating a dangerous disease or medical condition outweigh the minimal risks associated with this procedure. Most commonly, a gynecologist recommends cervical cone biopsies for several reasons, including:

Risks and Side Effects Associated with Conization

The possible risks of cone biopsies include excessive bleeding, fever or infection, which accompanies all surgeries. But a cervical cone biopsy is a minimally invasive procedure, and the gynecologists at Century Medical and Dental Center have performed many of them. Complications are exceedingly rare.

After your cervical cone biopsy in Brooklyn, you’re escorted into a recovery area, where you’ll be monitored for a few hours before being sent home. Common questions about your recovery include:

Loop electrosurgical excision procedures (LEEP) are similar to cone biopsies in that both procedures remove a portion of your cervical tissue for further testing. While cervical cone biopsies are performed using a scalpel or laser, LEEP uses a thin electrified wire to make the excision.

Whether you need a cervical cone biopsy, a LEEP procedure or an endometrial biopsy, you get the best care and the best results at a clinic that puts multiple medical specialties in one location. Contact our Brooklyn medical specialists at Century Medical and Dental Center to schedule an exam today.