No one knows how many people in the U.S. suffer with rosacea because not everyone with the condition reports it. Experts estimate that about 18 percent of Americans are being treated for the skin condition. While you may believe that rosacea only affects your appearance, leaving it untreated can lead to serious consequences. Don’t merely accept it as a condition that you can’t treat. You can take action against the unsightly skin disorder and the potential health dangers by calling a highly regarded dermatologist in Brooklyn at Century Medical and Dental Center. 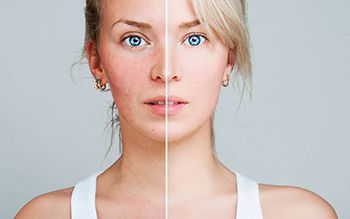 Rosacea is a common skin malady responsible for inflaming the blood vessels in your face, creating an excessively ruddy complexion. The condition usually begins with a healthy-looking blush on your cheeks or nose, but it can often worsen and spread to your chin, forehead and ears, eventually making its way to your chest, neck and scalp.

If left untreated, rosacea can worsen and develop solid or puss-filled bumps on your face and be mistaken for acne or even an allergic reaction. It can also result in a red, bulbous nose, called rhinophyma. According to the American Academy of Dermatology, untreated rosacea also may increase your risks of developing:

Rosacea appears in so many different forms that dermatologists have split the condition into four different subtypes:

Although approximately 14 million Americans have rosacea, most of them are not even aware they have it. While rosacea is more common in women, men tend to have more extreme symptoms, which may be a result of men postponing treatment. Rosacea can appear on anyone, but it’s most common in those who are:

Researchers have yet to determine the exact cause of rosacea. They have uncovered, however, a number of correlations to explain the skin discoloration, such as:

While rosacea does not correlate with poor hygiene, other factors that may increase the blood flow to the skin surface seem to trigger or worsen it, including:

Each of the four different subtypes of rosacea manifests its own particular symptoms.

Erythematotelangiectatic rosacea is characterized by:

Papulopustular rosacea exhibits symptoms such as:

Phymatous rosacea is the rarest subtype, and its symptoms usually begin as one of the other subtypes. Eventually, the skin takes on characteristics that include:

Ocular rosacea symptoms appear in your eyes in various ways, such as:

There’s no specific test for rosacea. Your experienced dermatologist at Century Medical and Dental Center conducts a visual exam, reviews your medical history and performs blood and skin tests or biopsies when deemed necessary to rule out similar conditions, such as:

Due to the highly variable nature of rosacea, treatments of the condition must be customized by your doctor. Since your Brooklyn dermatologist is part of a multi-disciplinary team at Century Medical and Dental Center, you have access to other specialists for diagnosis and treatment when needed. Common treatments for rosacea include:

If you’re suffering from rosacea, you’ve got some good company. Bill Clinton, Princess Dianna, Prince William and Cameron Diaz are just a few of the many celebrities that didn’t let rosacea hold them back. Contact Century Medical and Dental Center doctors to get a firm diagnosis and begin treatment to restore your healthy appearance and reduce the risk of further, serious complications.