A disruptive medical condition, polycystic ovarian syndrome or PCOS can give you a variety of symptoms, some of which are merely annoying, like PCOS hair loss, and others that affect your overall health and well-being, such as enlarged ovaries. While the best treatment may be weight loss, your gynecologist at Century Medical and Dental Center has medications and techniques to relieve your symptoms much faster and more efficiently than losing weight. Call today for an appointment. 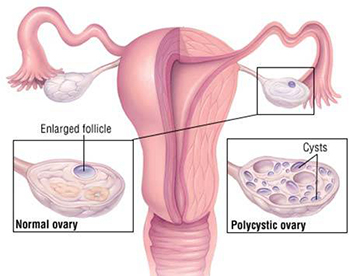 A hormonal disorder, polycystic ovarian syndrome, known as PCOS, most commonly affects women of reproductive age. If you’re suffering with PCOS, you may have infrequent or prolonged periods. You may also show evidence of higher than normal levels of the male hormone androgen, which can lead to male-associated symptoms.

When your reproductive hormones aren’t balanced correctly, many different symptoms can occur. Your body may react poorly to insulin. Progesterone seems to fall to low levels for those with PCOS. Early detection and treatment stop most symptoms.

The symptoms of PCOS may develop as early as your first period. You may not see any symptoms until much later, possibly in response to sudden weight gain. Although symptoms vary, experiencing at least two of them indicates a PCOS concern. Polycystic ovarian syndrome symptoms include:

The exact cause of polycystic ovarian syndrome is unknown, but may involve possible risk factors, such as:

Many conditions appear to aggravate PCOS. Early intervention may reduce the risk of subsequent type 2 diabetes and heart disease since there appears to be a link between polycystic ovarian syndrome and diabetes, often due to the resulting weight gain. Since it’s difficult to identify, many women wait several years before being given a definitive diagnosis of PCOS.

The Complicated Symptoms of PCOS

Besides the appearance of acne, extra facial hair and PCOS hair loss, other complications may arise from PCOS, including:

Obesity seems to be a characteristic that worsens the symptoms of PCOS. While no definitive test exists for the condition, your doctor takes all your symptoms into account when narrowing down a possible diagnosis. Your Brooklyn gynecologist at Century Medical and Dental Center determines if PCOS fits your symptoms through:

Your treatment depends on your symptoms. Some lifestyle changes can mediate the severity of your symptoms, while others work to right your hormone imbalance. For example, a modest five percent decrease in weight not only reduces your symptoms’ severity, it increases the effectiveness of any medications your doctor prescribes. Other possible treatments include:

Your gynecologist can use birth control pills or progestin therapy to regulate your menstrual cycle or specific medications to help you ovulate correctly, especially if you want to get pregnant with PCOS. You can reduce hair growth with other medicine or certain birth control pills, as well. But these medications prove most effective when you maintain a healthy weight.

You and your doctor may have to explore several different treatments or methods before you find the best combination for your symptoms. Since your gynecologist is part of a multi-disciplinary team at Century Medical and Dental Center, you have access to other important services to help, such as exercise and weight loss guidance form a physical therapist.

Some birth control methods lower your risk of endometrial cancer, making them more attractive. But you help yourself the most by maintaining healthy eating and exercise habits, as this lifestyle gives your body the fuel necessary to properly regulate hormones. Find out how you can overcome your PCOS symptoms at a consultation and examination. Contact our Brooklyn general physicians at Century Medical and Dental Center today!